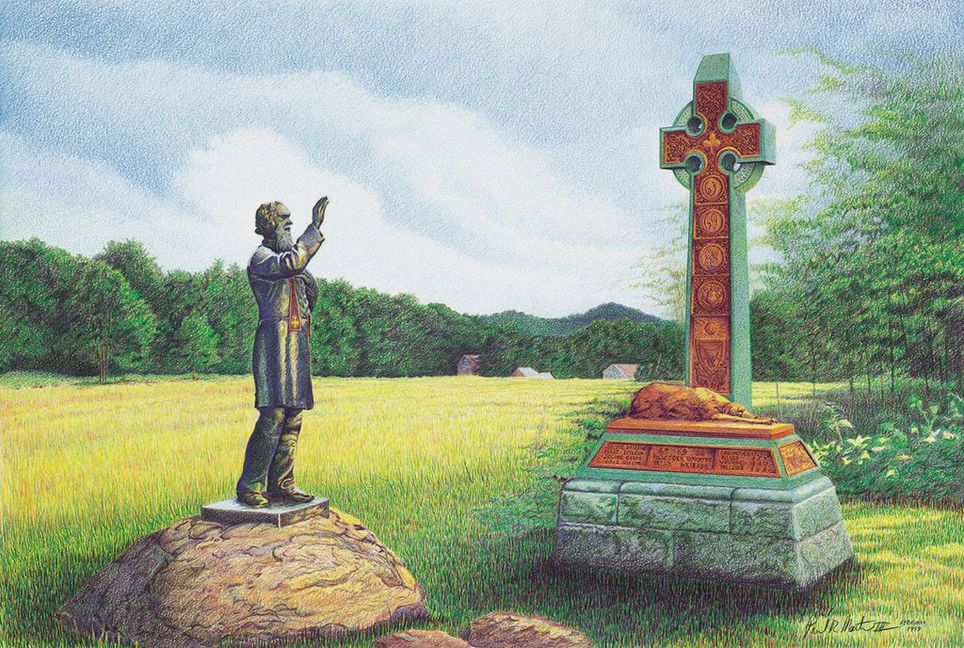 “Above all, while they loved the Green Flag of Erin, whence they sprung, they upheld with devoted, undying affection and loyalty the Stars and Stripes of America, the country of their adoption.”

“His cavalry is numerous but can’t ride and his infantry, except the Irish, can’t fight.”
Confederate Col. E. P. Alexander
(Comments on the Union forces)

On top of a large boulder on Cemetery Ridge stands the sculpted portrait of the Irish Brigade’s chaplain, Father William Corby. He is depicted with his right hand raised, giving battlefield absolution. About a mile away to the southwest, on the Stony Hill stands the Celtic cross monument to the NY Irish Brigade. I have always been intrigued by the significant similarities between these two monuments. The presence of these two powerful and important religious symbols on the battlefield, seems to reaffirm the sanctity of this hallowed ground. They invite the visitor to contemplate and reflect upon the underlying spiritual aspects of the Gettysburg Battlefield. This essential theme, plus the legend of Father Corby’s Battlefield Absolution and the courageous service and exemplary action of the Irish Brigade at Gettysburg, inspired me to create “Ego Te Absolvo”.

Within the composition I have combined several geographical locations and viewpoints. Although the Father Corby Monument site was identified by a brigade survivor, many historians feel that it has been inaccurately placed on the battlefield. Researchers now believe that the Absolution Ceremony took place farther north of the monument’s present location, nearer to the 1st Minnesota Monument and the Pennsylvania Memorial. I have used that general location as my reference point, placing the George Weikert farm at a farther distance from and at a different angle to the Corby sculpture. The Irish Brigade passed through the Weikert Farm on their way to battle. This vantage point also allowed for the inclusion of the Roundtops, a prominent landmark on the battlefield.

The “amber waves of grain” in the middle ground represent the Wheatfield, in which the Irish Brigade fought during their advance toward the Stony Hill. The Celtic cross was placed to make it appear as if Father Corby is blessing the monument itself. To create a perceptual ambiguity between the sculpture and a realistically rendered portrait, Father Corby’s stole was drawn in its actual colors of purple and yellow, his frock coat with a suggestion of Union blue and his face and hand with subtle flesh tones. Clouds appear to form a halo behind his head. The foliage behind the cross gradually fades and drifts into the sky, subtly suggesting the smoke of the battle emanating from the Wheatfield just beyond the Weikert Farm.

“No words of mine can fittingly describe the heroic conduct of the men in whose memory this
monument has been erected. Their deeds will be remembered in song and in story so long as the history of our country is read.”

The NY Irish Brigade Monument was dedicated on July 2, 1888. It was erected on the hill where it marks the farthest point of their advance. Ironically, it was sculpted by an ex-Confederate soldier, William Rudolph O’Donovan, who fought against the Union at Gettysburg. O’Donovan also created equestrians of Lincoln and Grant and the Soldiers and Sailors arch in Prospect Park, Brooklyn, NY.
O’Donovan’s design consists of an 11 foot Green Malachite Celtic cross with an ornate bronze front. Included on the front are the 2nd Corps Trefoil symbol, the numeric designations of the 63rd, 69th and 88th NY Regiments, the NY State Seal, as well as the sunburst seal of Ireland and a harp flanked by two American eagles. These elements are surrounded by an intricate design of traditional Celtic interlacing and knotwork. An Irish wolfhound, the symbol of fidelity and honor, rests on the base. A relief plaque on the right side of the base represents Rorty’s 14th NY Independent Artillery Battery which was attached to the original Irish Brigade in 1861. The monument only represents the three NY regiments of the brigade. The 116th PA and the 28th MA each erected their own regimental monuments a little farther west on the Stony Hill.

Father Corby attended the dedication ceremony where he blessed the monument and held a military mass for the returning brigade veterans.

“We have unveiled this pile, and it will stand to perpetuate the fame of those heroes. To keep their memory green in the American heart, this Celtic Cross has been erected. It is an emblem of Ireland, typical of faith and devotion, and the most appropriate that could be raised to hand down to posterity the bravery of our race in the great cause of American liberty.”

The Father Corby Monument was dedicated on October 29, 1910. It was sculpted by Samuel Aloysius Murray. A son of Irish immigrants, he is also the creator of the sculpted portraits on the Pennsylvania State Memorial.

The Corby Monument would not exist at all if not for the efforts of General St. Clair Mullholland. As the commander of the 116th PA at Gettysburg, Mullholland witnessed and took part in the Gettysburg Battlefield Absolution. He was so impressed by its significance that he wrote of it in his memoirs and retold the story in speeches at dozens of veterans meetings and reunions. Mullholland also felt strongly that Father Corby deserved more recognition for this particular episode as well as for his overall war record. In the late 1880’s he and Major W. L. D. O’Grady of the 88th NY, began a campaign to award the Congressional Medal of Honor to father Corby. Mullholland cited his valor during the war, and called his spontanious absolution ceremony, the “Most remarkable act in preaching a most patriotic sermon and administering the religious rite of general absolution on the battlefield at Gettysburg.” Major O’Grady called the absolution, “One of the most picturesque and beautiful incidents of that great drama.” However, the medal was never awarded to Father Corby.

Failing to get Father Corby the Medal of Honor, Mullholland then presented the idea of turning the Catholic Church in Gettysburg into a memorial to all Catholic soldiers who died during the war. This memorial would include a statue of Father Corby in front of the church or on the battlefield itself. Nothing was to come from this proposal due to a lack of funds.
However, after telling his account of the absolution at a meeting of the Federation of Catholic Societies in Philadelphia in December of 1908, the idea for a memorial to honor Father Corby began to gain supporters. The Catholic Alumni Sodality of Philadelphia started a memorial fund in January of 1909. Chaired by Mullholland and endorsed by many bishops, archbishops and other clergy throughout the country, the money was quickly raised to complete the monument. Notre Dame also supported the project and decided to place a duplicate of the statue on campus. That statue was dedicated on Decoration Day in 1911. Irreverent students at the University have nicknamed the statue, “Fair Catch Corby” because of his upraised arm and proximity to a football practice field.

Both sculptures stand on natural boulders. They evoke the quiet dignity and spiritual strength of Father William Corby. It is my hope that “Ego Te Absolvo” reflects that same dignity and honors the memory of Father Corby and the thousands of Irish immigrants who sacrificed their lives to preserve the Union of their adopted country.