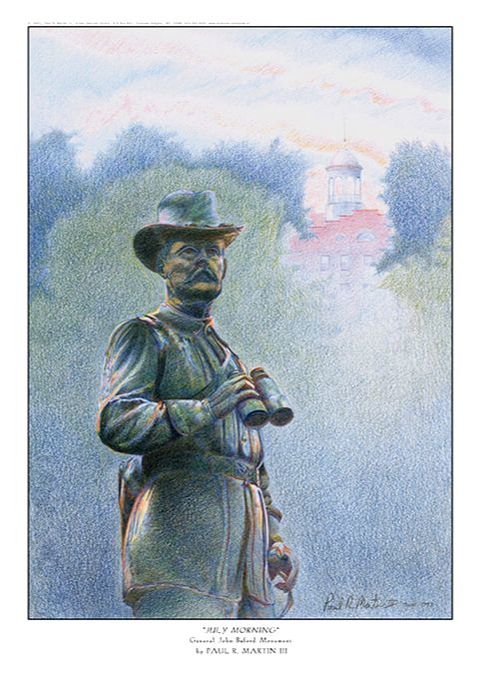 “John Buford was the best cavalryman I ever saw”

“They will attack you in the morning and they will come booming-skirmishers three deep.  You will have to fight like the devil to hold your own until supports arrive.”

“By daylight on July 1, I had gained positive information of the enemy’s position and movements, and my arrangements were made for entertaining him until General Reynolds could reach the scene.”

This print was inspired by the quiet strength of the sculptural portrait of General John Buford on the Chambersburg Pike and by the silent dawn of a “July Morning” on McPherson’s Ridge.  I tried to focus on the calm in Buford’s eyes as he gazed confidently down the pike, even with the knowledge of the great challenge and task before him.  As my imagination wandered the way the early morning fog floats over the fields surrounding the Lutheran Theological Seminary, I heard the hoof beats of Buford’s cavalry echoing across the years, as they prepared to meet the Confederate onslaught that “July Morning” of 1863.
For artistic and compositional reasons I have placed Buford’s image closer to the seminary buildings.  This enabled me to include the cupola, which was used by the General as an observation post that morning.
General John Buford was born in Kentucky in 1826 and graduated from the United States Military Academy at West Point, class of 1848.  He was a professional soldier with an exemplary military career.  Prior to the Civil War he spent 13 years on the frontier as a horse soldier, serving his country well as an officer in the U.S. Second Dragoons.  At the outbreak of the war he faced the same difficult decision faced by all Southern born United States Army officers, including his good friend North Carolina born John Gibbon.  After the war General Gibbon recalled how Buford committed himself to remain loyal to the Union.  The governor of Kentucky sent Buford a letter asking him to return to Kentucky to fight for the Confederacy, offering him “anything he wants”.  After telling Gibbon about this letter, Gibbon asked Buford what his reply was.  To Gibbon’s relief, Buford stated; “I sent him word I was a Captain in the United States Army and I intend to remain one!” [1]  Little did they know that his decision would have such dramatic and far reaching impact just two years later outside a little town named Gettysburg.
In early June of 1863 Buford was promoted to commander of the First Division of cavalry.  For eight straight months of that year, from May until his death in December, Buford was constantly in the saddle campaigning and fighting.  Under his leadership the Union Cavalry finally came into their own, ably matching skills with their Confederate counterparts in a series of engagements, including Brandy Station, Aldie, Middleburg and Upperville.  After their valiant stand at Gettysburg, they continually harassed Lee’s Army and Cavalry, clashing often and driving them through Maryland to the Rappahannock and Culpeper Virginia.   Although dangerously ill during this time of strenuous activity, Buford never asked to be relieved of his command to rest and recuperate.  On December 16, 1863 he ultimately succumbed to his illnesses, a combination of typhus, rheumatism, pneumonia and sheer physical exhaustion.  Just before his death he was promoted to Maj. General by President Lincoln “for distinguished and meritorious service at the Battle of Gettysburg”.[2]  Buford was not actually killed in battle action, but he did sacrifice his life for his country.  His death was certainly a direct result of his dedicated service and unfailing devotion to his sworn duty.
In the grand entryway in Cullum Hall at West Point, there is a large bronze memorial plaque, remembering the names of all graduates killed in action in our nation’s wars.  John Buford’s name is not on that plaque.  He is buried in the West Point Cemetery, right next to Lt. Alonzo Cushing, another hero of Gettysburg.  Visitors and cadets still leave flowers and notes at his graveside, simple tokens of appreciation and heartfelt tributes to his gallantry and honor, at a time when his country needed him most.
The monument to General John Buford at Gettysburg was dedicated on July 1, 1895.  Sculpted by James E. Kelly, Buford is “shown in the attitude of anxious expectation as the opposing forces were moving into the first day’s fight”.[3]  It was paid for and erected by the Buford Memorial Association.  The BMA was a group of the General’s admirers and old division members who met at the twenty-fifth anniversary of the battle.  At that time they began plans to create a suitable monument to honor their former commander who had given his life for his country.  The design incorporated four Ordnance Rifles from John Calef’s Horse Artillery Battery, which was under Buford’s command.  Rifle number 233, which fired the first Union artillery shot of the battle under Buford’s orders, points westward down the Chambersburg Pike.[4]
Today General John Buford’s Monument stands, silent and forever vigilant, symbolically staring westward, as if formulating plans for his Division’s stubborn defense of the high ground south of town.  His keen observation and precise geographical and military assessment, plus his brief but brilliant tactical ingenuity and implementation, secured victory for the Union two days later.  Buford’s achievement and the accomplishment of his Division that  “July Morning” are best summed up by the General himself, when he wrote in his Official Report;

“The zeal, bravery, and good behavior of the officers and men on the night of
June 30, and during July 1, was commendable in the extreme.  A heavy task was before us;
we were equal to it, and shall all remember with pride that at Gettysburg we did our
country much service.”

“July Morning” is my tribute to the visionary presence of General John Buford; it honors one of the unsung Union leaders of the Battle of Gettysburg.

“The hero at Oak Ridge was Buford....he not only showed the rarest tenacity, but by his personal capacity made his cavalry accomplish marvels.....!”