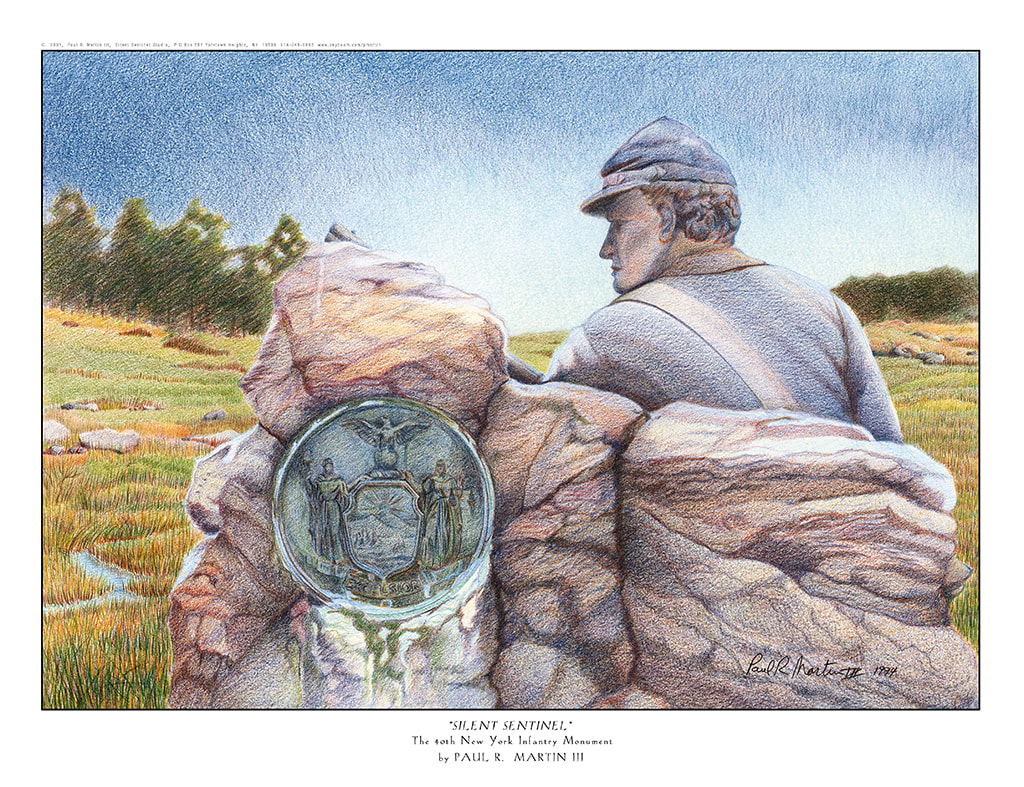 “The 40th New York was dispatched to cover the gorge, which they did most effectually.”
Brig. Gen. J. H. Hobart Ward

“The 40th regiment New York Volunteers, Col. Egan, was sent by me ....to strengthen General Wards line, and, led by its gallant, dashing colonel, charged the enemy and drove him back from his advanced point, and poured the most terrific fire into his ranks.”
Maj. Gen. D. B. Birney

“At this time the 6th New Jersey and the 40th New York came to our support.  These regiments marched down the gully, fighting like tigers, exposed to a terrific fire of musketry.....”
Captain James E. Smith
4th New York Battery

The 40th New York Infantry Regiment had its origins with the Democratic Party in New York City.  Prior to the war, the Democratic Party was considered to be a “Secessionist” party.  After the South’s break from the Union many party factions in New York City hurriedly tried to organize regiments.  One element of the Democratic Party was nicknamed the “Mozart Faction” or the “Mozart Hall Committee” after their meeting place.  The “Mozart Faction” was called upon by its leader, Mayor Fernando Wood, to raise a regiment for the defense of the Union.  Mayor Wood was also the chairman of the city’s Union Defense Committee.1
The “Mozart Regiment” was made up of 4 companies from New York City, 4 companies from Massachusetts and 2 companies from Philadelphia.  The regiment was designated the 40th NY.2
The 40th N Y Monument rests silently where they fought in the “valley of death” between Little Round Top and Houck’s Ridge.3 The unit lost 23 men killed, 120 wounded and 7 missing during their charge down the “valley” on July 2.4  The monument was sculpted by R. D. Barr to represent a member of the unit kneeling behind a boulder.5  . The monument was dedicated on July 2, 1888.6   A member of the 40th N Y returned to the battlefield sometime shortly after the battle and carved, “40 N Y” into a small rock in the valley, presumably to mark the position where they did the most fightingThat carving can be found on a small rock near the southwest corner of the monument base.
There are no  more living members of the 40th N Y left to tell their story. To this day their monument is all that’s left, to stand guard over their history at the Battle of Gettysburg.  Their monument and all the other bronze and granite “Silent Sentinels” on the battlefield are all we have to remind us of the valor, courage and sacrifice that took place upon these fields.  “Silent Sentinel” is dedicated to the memory of the 40th N Y and all that they did to preserve the Union.

“I Immediately ordered my men to charge, when with great alacrity they pushed forward at a double-quick, crossing a marsh up to their knees in mud and water.  The enemy fell back upon my advance....”

A silent sentinel
Staring into the long remember