"Sons Of Virginia"
The Virginia Monument 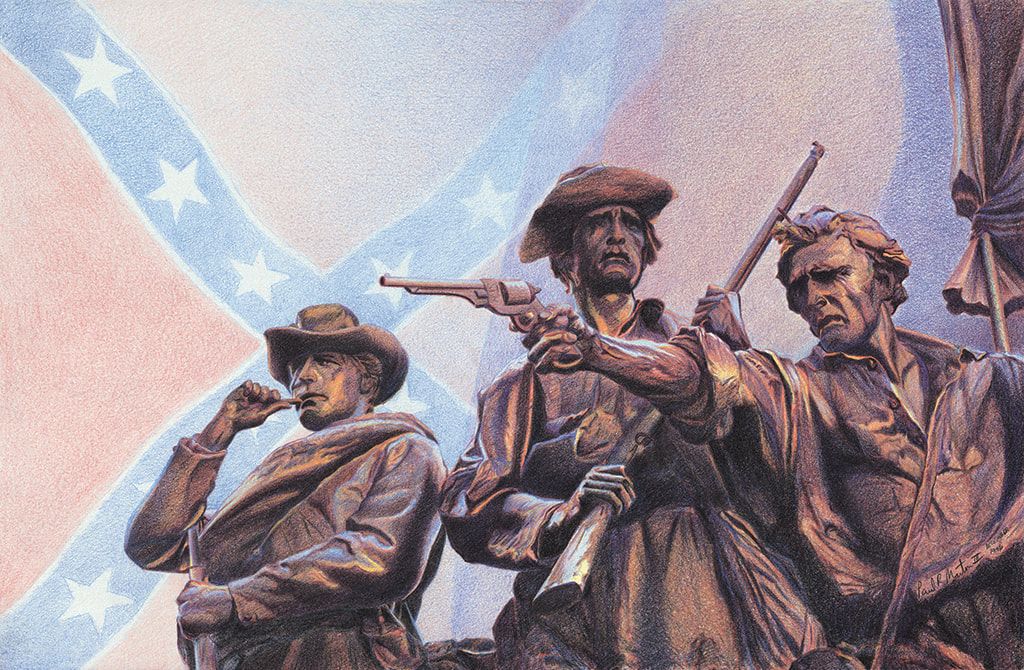 " For every Southern boy fourteen years old, not once but whenever he wants it, there is the instant when it’s still not yet two o’clock on that July afternoon in 1863, the brigades are in position behind the rail fence, the guns are laid and ready in the woods and the furled flags are already loosened to break out ...... and its all in the balance, it hasn’t happened yet, it hasn’t even begun yet, it not only hasn’t begun yet but there is still time for it not to begin against that position and those circumstances ....... yet it’s going to begin, we all know that, we have come to far with too much at stake and that moment doesn’t need even a fourteen-year-old boy to think .....this time. Maybe this time ........."

William Faulkner
"Intruder In The Dust"

“Sons Of Virginia” was inspired by the expressive emotion captured in the faces of F. William Sievers’ sculpture on the Virginia State Monument at Gettysburg. It was dedicated on June 8, 1917 and the seven soldiers across the base are meant to represent a cross-section of Virginia manhood. From left to right they are: a professional man, a mechanic, an artist, a boy, a businessman, a farmer and a youth.

I have always been moved by the poignancy of these soldiers as they silently gaze forever across the now tranquil fields of Pickett’s Charge. It is as if they can see what we can only feel and sense upon that hallowed ground. This is a serene place in the early morning, a perfect time to catch the way the warm sunrise reflects off of the polished bronze and bathes the figures in a golden orange glow.

The Army of Northern Virginia battleflag drawn across the sky in this print was modeled after the “Unknown battleflag of ‘Pickett’s Corps’ ”. The usual white borders were extended off the edge of the picture plane for artistic reasons. It was also decided that no battle scars would be drawn in, so as to symbolize the same pre-battle optimism that I see in the determined faces of the soldiers on the monument.

It is my hope that “Sons Of Virginia” evokes the dignity and honor of those who fought and died and that it pays a fitting tribute to the common soldier from the state of Virginia.