Whispers At The Wall 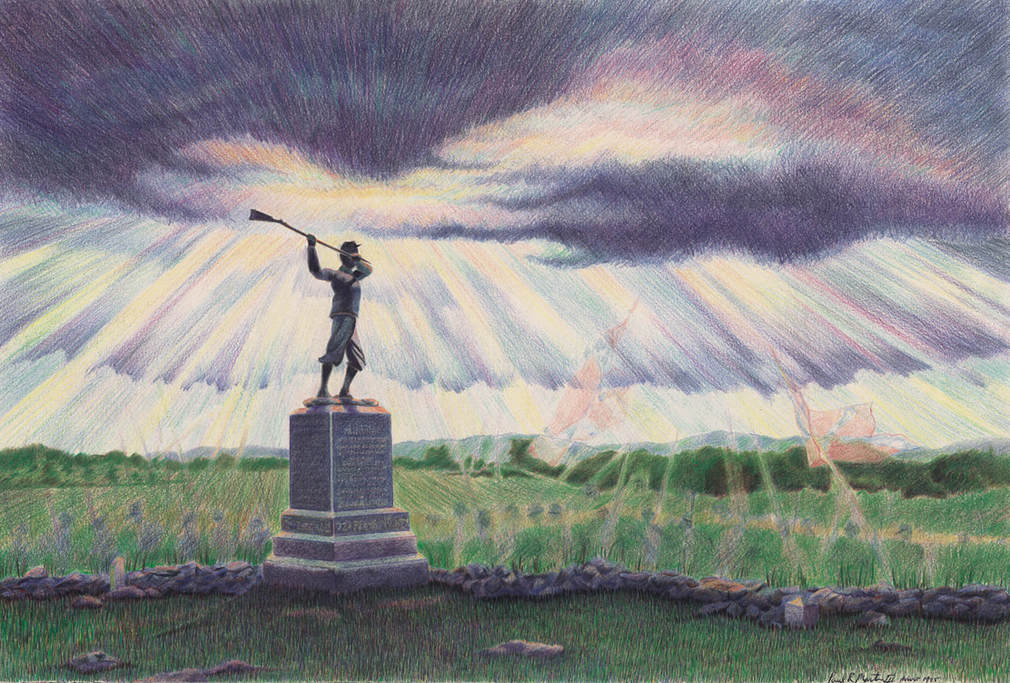 "Whispers At The Wall"


“WHISPERS AT THE WALL”
The 72nd Pennsylvania Infantry Monument

“Whispers At The Wall” is my impression of the wonder and beauty of a Gettysburg landscape at sunset. I feel that it expresses the essence of a Gettysburg Battlefield visit and that it is representative of the style of all my work. I tried to evoke the contemplative and meditative nature of the battlefield and the sense of poignancy that pervades the Angle on Cemetery Ridge, the point of attack for the Grand Assault of July 3, 1863.

The monument to the 72nd Pennsylvania Infantry Regiment featured in this print was designed by former 72nd Private John Reed and was sculpted by Stephens. The sculpture depicts a very youthful looking Zouave uniformed soldier, representing that 86% of the regiments original 1400 volunteers were under the age of 21. It was dedicated on July 4, 1891. The soldier is depicted swinging his musket like a club, representative of the close hand-to-hand combat experienced by the regiment at the wall.

“At 3p.m. we were ordered to advance upon the stone wall on our immediate front,it being discovered that the enemy were making a demonstration in that direction. At this point the regiment became engaged with Pickett’s division of the rebel army, and after a severe contest, lasting about half an hour, succeeded in routing the enemy and occupying the wall, which position it held until the withdrawal of the brigade on the morning of the 5th. In this engagement the regiment captured two rebel colors and a number of prisoners.”

To this day their monument strikes a pose as dramatic as the sunsets that often caress the ridge on July evenings. “Whispers At The Wall” was inspired by such a sunset, and the thought-provoking silence that falls across that hallowed ground at dusk.

There are only two confederate monuments near the Angle at Gettysburg. The General Armistead Marker is right behind the 72nd PA monument and a 26th North Carolina Regiment Marker is a little farther north. I have always thought that a monument to Pickett’s Division should also have been placed there. I have represented Pickett’s Division by placing subtle visions and shadows of soldiers and flags at the stone wall. The Pennsylvania troops are represented by the monument itself.

This print is meant to be a symbolic memorial to the lost souls whose “Whispers At The Wall” are all of their voices echoing to us from beyond the past, so that we will “.... never forget what they did here”. It was my hope to create an imaginative and emotional connection to this historic and dramatic conflict of the Civil War, while paying tribute to the honor and valor of all Americans, North and South, who fought and died there 133 years ago.


Hear the whispering, rising from the earth
Stir the quiet dust, touch the grass
Silent angels glide, guarding patiently
Their heroic deeds of the past.

We cannot forget or betray their love
All their hopes and dreams, willed to us
In their final cries, dying embers rise
All their memories, our sacred trust.

“The trenches are still easily seen and their grass grown flower strewn slopes agree ill with the bloody purpose for which they were designed and used.

Nature covers up the scars of earth far better than those of men. There is to me strange fascination in looking at the scenes of the awful struggles which raged over this country.

This evening after supper I walked down alone to the scene of the last and fiercest struggle on Cemetery Hill. To get in a proper frame of mind I wandered through the cemetery and let the spirits of the dead thousands laid there in ordered rows sink deep into me. Then just as the sun sank behind South Mountain I walked down to the scene of Pickett’s great charge and seated on a rock just where Armistead and two of my great uncles died, I watched the wonder of the day go out.

The sunset painted a dull red the fields over which the terrible advance was made and I could almost see them coming, growing fewer and fewer while around and beyond me stood calmly the very cannon that had punished them. There were some quail calling in the trees near by and it seemed strange that they could do it where man had known his greatest and last emotions. It was very wonderful and no one came to bother me. I drank it in until I was quite happy. A strange pleasure, yet a very real one.

I think that it takes an evening like that to make one understand what men will do in battle.”